Operatives of the Special Anti-Robbery Squad, Lagos State Police Command, have arrested an Alsatian dog named Bullet, for alleged robbery in the Ladipo, Oshodi area of the state.

The state Commissioner of Police, Edgal Imohimi, during a parade of the dog at the command headquarters in Ikeja on Thursday, said two other robbery suspects, Odunade Olajide and Adeniyi Adisa, sent the dog after their victims.

He explained that in fear, their targets would surrender their belongings.

The CP said after dispossessing the victims of cash and other valuables, the suspects would speed away with the dog on a motorcycle.

He said the men, however, met their Waterloo while attempting to rob a lady of her valuables in Ladipo, as the victim raised the alarm and the suspects were apprehended by the police.

Imohimi noted that their operational motorcycle was also recovered.

He said, “On September 5, 2017, two local criminals, who specialised in robbing people by sending a dog to attack them, were arrested. The suspects would command the Alsatian dog to attack a victim. The dog, in response to the command, would pounce on the person. Gripped with fear, the person would hand over all his belonging to the gang.”

The CP explained that detectives had been on the trail of the suspects, but luck ran out on them last Thursday when they were arrested.

But the suspects denied the allegations, saying they had only gone to buy dog feed when the woman raised a false alarm.

Olajide said the woman eventually found her phone where she kept it, adding that by then it was late as SARS operatives had arrested them.

The suspects – William Igana, Valentine Igana, Abdul-Rasheed Jimoh, Francis Madu, Usman Adeyemi – were alleged to have been involved in the death of the 38-year-old at his house on Olufowora Close, New Oko-Oba, Agege.

PUNCH Metro had reported that Jobarteh was shot dead on September 3, 2017, after he was trailed to his home from the airport where he had gone to pick up his younger brother. 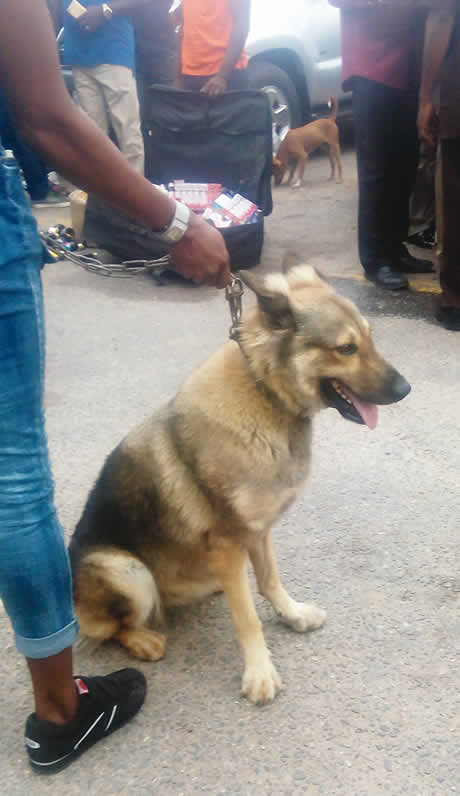 However, one of the suspects, William, a Uber driver that drove the suspects to Jobarteh’s house, said he didn’t know their mission when he was hired.

He noted that he had just started with the online transport company when he was hired by the men who later turned out to be killers.

He said, “I had just been registered under the Uber platform and I needed an android phone to facilitate the business.  I called my brother, Valentine, to help me with a phone.  He introduced me to his friend, JK.  JK said he had a phone I could use, which he offered for sale at N10,000.“The next day, JK called me to take him to Yaba.  On our way there, we stopped and picked two other guys.  I charged them N10,000 for the service, but they gave me N8,000 and promised to pay the balance later.”

He said after the trip to Yaba, JK called him the following day and asked him to take him and his friends to Abeokuta, Ogun State.

He said he charged N20,000 for the service, which they promised to pay.

“On our way to Sango, they asked me to stop at a bushy path. They brought out a gun, which they pointed at my head. They threatened to kill me if I shouted. Two of them came down and walked to a house where they shot two persons.

“They jumped back into the vehicle and asked me to drive off, which I did. But at a point, I stopped the car and told them I wasn’t going again; they insisted that I continue driving. JK said the only reason he wouldn’t kill me was because my brother, Valentine, was his good friend.

“I never knew they were into any criminal activity. I was only doing my business. I was arrested by the police through my brother, Valentine.”

Jobarteh’s phone was said to have been stolen by the assailants.

PUNCH Metro learnt that the phone was tracked to Jimoh, who bought it at Computer Village, Ikeja.

In his statement, Jimoh said he never knew the phone was stolen.

He said he had innocently gone to Computer Village to buy a phone, adding that he bought the phone for N15,000 from Madu.

On his part, Madu claimed an engineer friend who came with Adeyemi, sold the phone to him.

Eighteen-year-old Adeyemi said his uncle, one Ismaila, owned the phone.

Imohimi said the command was making efforts to arrest other suspects, adding that the men would be charged to court at the end of investigations.

A sixth man was arrested in Britain early on Thursday as part of the probe into the bomb attack on a London Underground train last week, police said. The man, aged 17, was detained under […]

The Lagos State Traffic Management Authority, LASTMA, has arrested eight of its officials for collecting bribe from motorists and other corrupt practices. The officials, who are attached to the Agege-Pen Cinema Office of the Agency, […]

Video of the week